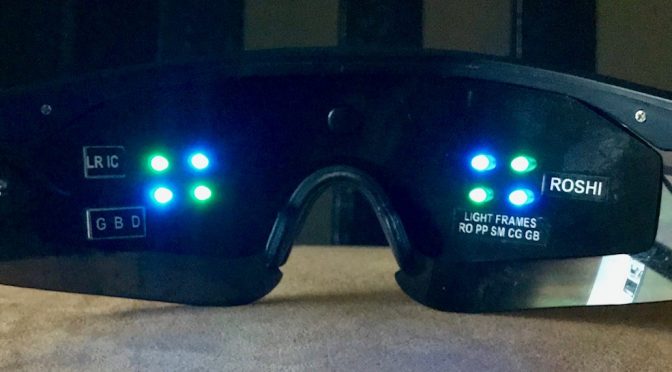 I was a typical migraineur – carrying medicine with me wherever I went forever worried I’d be attacked with a dreaded migraine. While my over-the-counter medication would help in the moment, it caused me to wake up day after day with that same pounding migraine and increasing frustration. If I had not found neurofeedback, I’d still be that same hopeless migraineur.

When I began working at BiofeedbackWORKS, I was excited and intrigued by the effectiveness of neurofeedback. I had no idea how profoundly it would change my life for the better. As a new employee, I received a few sessions of standard neurofeedback training of my own. The modality I found most helpful to reduce pain in the midst of a migraine was a set of LED flickering light glasses called pROSHI. These glasses work by sending a standardized signal to the brain which the brain mimics. As a result, the brain is trained to return to a calm, relaxed, awake state. By switching between different colored glasses, the flexibility of the brain increases. After experimenting with a few different colors, I found that the oceanic (blue/green) glasses successfully reduced my head pain. I left the office in amazement at the potential of the pROSHI to be an effective solution to my migraines.

Curious to learn more about the pROSHI, I searched online for any research articles on the subject. Interestingly, I found a study completed by Harvard Medical School researchers published in 2016. The researchers found that exposure to green light exacerbated migraine headaches the least. They further concluded that it may be therapeutic to migraineurs by reducing headache intensity. I was amazed to learn that this research supported what I had personally experienced. Thanks to neurofeedback and pROSHI my migraines are now extremely rare, much less painful, and easily relieved. Now, it is my pleasure to introduce pROSHI to fellow migraineurs at BiofeedbackWORKS so they too can experience life migraine free!